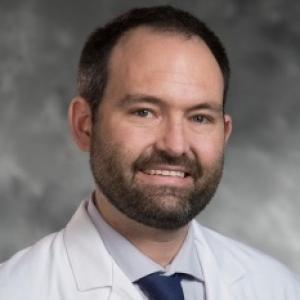 The goal of the Reitman Lab is to make discoveries that guide the design of improved treatment strategies for children and adults with brain tumors. The Reitman Lab is based in the Department of Radiation Oncology and the team works closely with the faculty and staff in the Preston Robert Tisch Brain Tumor Center at Duke, the Department of Neurosurgery and the Duke Cancer Institute. 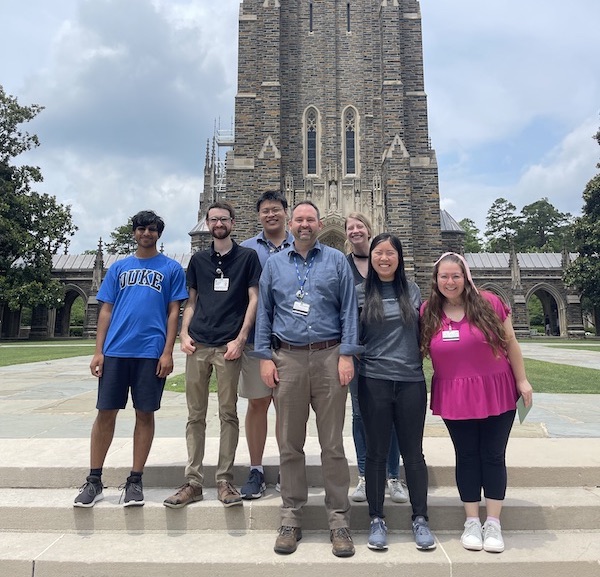 Reitman Lab members in June 2022 in front of Duke Chapel

The goal of the Reitman Lab is to make discoveries that guide the design of improved treatment strategies for children and adults with brain tumors. We leverage molecular biology techniques, genetically engineered mouse models and cancer genomic approaches to carry out our work. The Reitman Lab is based in the Department of Radiation Oncology and the team works closely with the faculty and staff in the Preston Robert Tisch Brain Tumor Center at Duke, the Department of Neurosurgery and the Duke Cancer Institute.  We are interested in several broad research themes:

Enhancing the efficacy of radiation therapy

Figure 1. Frequent DNA damage response pathway gene mutations in brainstem and thalamus gliomas.
Each column represents a patient with a brainstem or thalamus glioma. This includes predominantly diffuse midline gliomas with H3K27M mutations (H3F3A mutated) and diffuse intrinsic pontine gliomas (DIPGs). The top two rows delineate the location and histopathologic grade of the tumor. The bottom four rows indicate the presence of mutations in key cancer genes in each tumor specimen. The data show that the >50% of these brain tumors harbor inactivating mutations in the tumor suppressor TP53, which regulates apoptosis and cell cycle progression especially after DNA damage is caused by radiation therapy. Additional tumors that do not contain TP53 mutations instead contain mutations that activate PPM1D, which encodes a phosphatase that dephosphorylates and represses p53 function. Thus, the majority of these brain tumors contain mutations that deregulate the DNA damage response pathway by perturbing p53 function. We are testing if targeting the serine/threonine kinase ataxia telangiectasia mutated (ATM), which plays a critical role in the detection of DNA damage caused by radiation therapy, can specifically radiosensitize diffuse midline gliomas with TP53 or PPM1D mutations. This work is primarily being carried out in genetically engineered mouse models of diffuse midline gliomas that faithfully replicate the genetic mutations in these tumors.
Figure from: Zhang L… Reitman ZJ, Bigner DD, Yan H. Exome sequencing identifies somatic gain-of-function PPM1D mutations in brainstem gliomas. Nat Genet. 2014 PMID: 24880341

Knowledge of the genomic landscape of brain tumors has exploded over the past decade. In many types of cancer outside the brain, this type of genomic knowledge has resulted in new therapies that improve patient survival by targeting mutations found in the genome of the cancer cells. However, advances in genomic characterization of brain tumors have not yet produced new survival-improving therapies for many types of brain tumors. To overcome this challenge, the Reitman Lab is investigating creative new approaches to target frequent mutations found in brain tumors. For instance, we are interested in finding novel actionable vulnerabilities associated with mutations in the promoter of the telomerase reverse transcriptase gene (TERT). TERT promoter mutations are found in more than 80% of glioblastomas, which are the most frequent and lethal primary brain tumor in adults, and the mutations confer a replicative immortality phenotype to brain tumor cells (Figure 2). 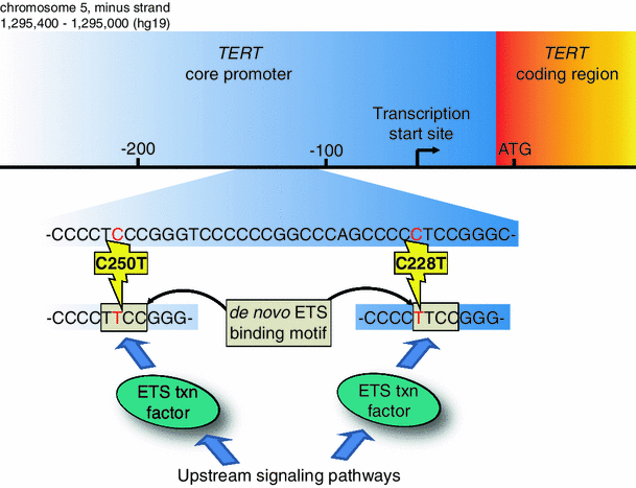 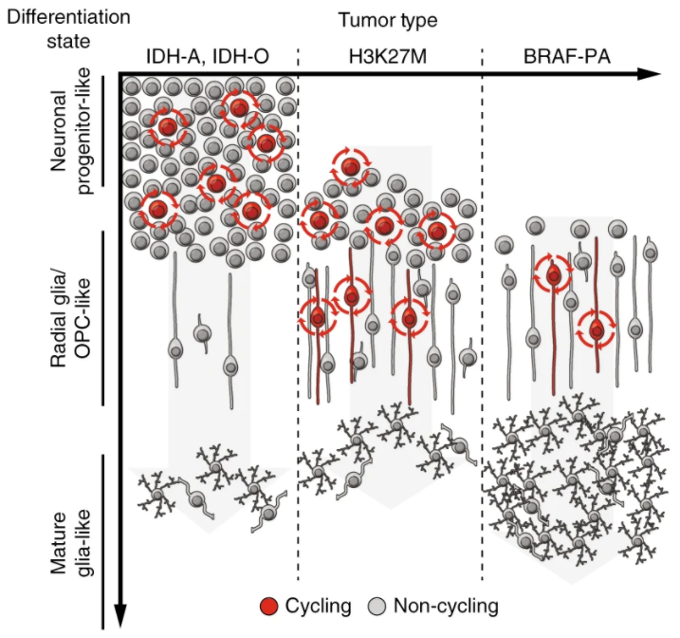 We are also interested in innovatively harnessing gain-of-function cancer mutations to inform the design of valuable new enzymes, which could potentially be useful for drug and chemical production processes (Figure 4).

Figure 4. Enzyme redesign guided by cancer-derived mutations.
Cover artwork from Nature Chemical Biology showing (on the left) oligodendroglioma tumor cells, which contain an isocitrate dehydrogenase 1 (IDH1) R132H mutation. The active site of IDH1 is shown on the right. The R132H mutation affects a critical active site residue of IDH1, conferring a change-of-function to the IDH1 enzyme. We applied analogous mutations to the active sites of distantly related enzymes to redesign those enzymes into novel, useful enzymes with new functions. Future work seeks to identify additional cancer-derived mutations in enzyme active sites that could be used to guide the design of useful enzymes in a similar manner.
Figure from: Reitman ZJ, et al. Enzyme redesign guided by cancer-derived IDH1 mutations. Nat Chem Biol. 2012 PMID: 23001033

Additionally, we are interested in circulating tumor DNA (ctDNA) that is released from brain tumors into the circulation, especially as they undergo radiation therapy, to determine if testing for these byproducts could be used to improve the clinical management of brain tumor patients. 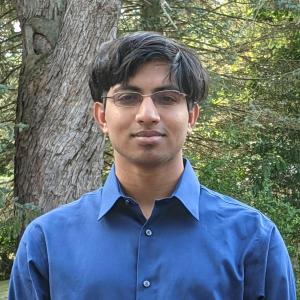 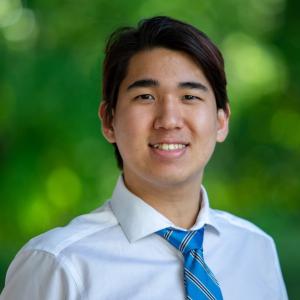 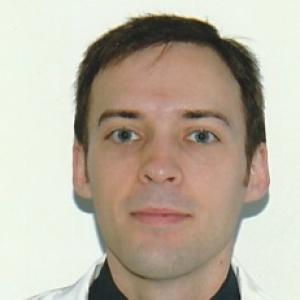 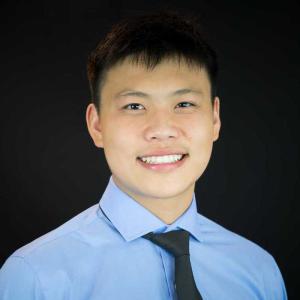 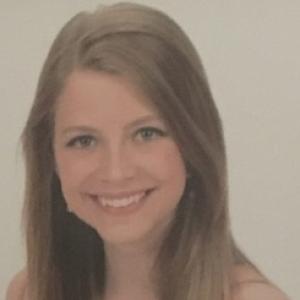 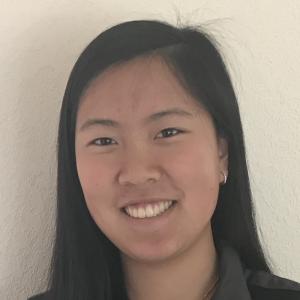 Debosir Ghosh
Debosir Ghosh is an undergraduate research assistant and has been a member of the Reitman Lab at Duke since spring of 2022. He is currently pursuing degrees in neuroscience and chemistry and also working towards a minor in piano performance. Since high school, Debosir has been especially captivated by radiation oncology and how the findings of genetically-engineered mouse-models can be used to potentially treat cancer patients. In the lab, he has been working with Dr. Reitman to investigate brainstem gliomas and aspires to eventually become a physician. In addition to his studies in science and music, Debosir is also an avid aviation enthusiast and enjoys plane spotting with friends and family.

Harrison Liu
Harrison Liu joined the Reitman Lab in the summer of 2022. He graduated in 2021 from the University of North Carolina at Chapel Hill with a Bachelor of Science in biology. Harrison is fascinated by oncology research and looks forward to continuing it in medical or graduate school. No matter where he ends up, Harrison is determined to drive scientific discovery and innovation in his career to better patient outcomes. Besides science, Harrison enjoys cooking, playing golf and cheering on the best college basketball team – his alma mater.

Joshua A. Regal, MD, PhD
Joshua Regal is a postdoctoral associate in radiation oncology at Duke. Joshua completed his MD and PhD training at the University of Michigan. His PhD work with Dr. David Ferguson involved deciphering roles of dysfunction of the DNA damage response/repair factor MRE11 in carcinogenesis and human genetic disease pathogenesis. As a postdoctoral fellow at University of British Columbia with Dr. Phil Hieter, his work involved mechanistically dissecting cohesin genetic interactions to better understand the consequences of cancer-associated cohesin alterations with potential implications for cancer diagnosis, prognostication and treatment. He has joined the Reitman group to better understand brain tumors on a cellular and molecular level, which could potentially be leveraged for better understanding of tumor development and maintenance and therapeutic management and development.

Zach Reitman, MD, PhD
Zach Reitman is a physician-scientist at Duke. As a physician, he provides radiation oncology care for patients with brain and spine tumors at the Duke Cancer Institute. As a scientist, he and his team work to understand the molecular genetics of childhood and adult brain tumors in order to develop new treatment strategies that are more effective and have fewer side effects. Zach completed his MD and PhD training at Duke where he studied brain tumor genetics in the laboratory of Professor Hai Yan, a world expert in genomic analyses of brain tumors. He completed radiation oncology residency training at the Harvard Radiation Oncology Program, where he completed a research fellowship at the Dana-Farber Cancer Institute and the Broad Institute in the laboratories of two brain tumor genomic research experts, Dr. Rameen Beroukhim and Dr. Pratiti Bandopadhayay. Now back at Duke as a junior faculty member, he is co-mentored by Professor David Kirsch, an internationally recognized expert in genetically engineered mouse models of cancer and radiation biology, and by Professor David Ashley, the Director of the Tisch Brain Tumor Center at Duke and a worldwide expert on clinical and translational neuro-oncology. Zach and his team are now leveraging genomic analyses and mouse modeling techniques to carry out new lines of investigation in the Reitman Lab.  In his free time, Zach enjoys hiking, biking and spending time with his family.

Kevin Tu
Kevin Tu is an undergraduate at the University of Maryland who joined the Reitman Lab as an Amgen Scholar. Working towards a double degree in biology and economics, Kevin is interested in uncovering and targeting the genetics that drives cancer progression and onset to improve patient outcomes. An aspiring physician-scientist, Kevin hopes to earn an MD-PhD in cancer biology and develop gene-based therapies, diagnostic tools and biomarkers for aggressive and treatment-resistant cancers. In his spare time, he enjoys sketching with charcoal and playing video games with friends.

Loren Weidenhammer, BS
Loren Weidenhammer is a research technician in the Reitman Lab at Duke. She received a Bachelor of Science in biology with a double major in history from the University of North Carolina at Chapel Hill. As a biologist, Loren is interested in studying the underlying molecular mechanisms of cancer and how those mechanisms can be applied to improving cancer radiation treatment. She is working with Dr. Reitman to investigate the molecular genetics of brain cancer tumors that are found in children and adults, with the goal of improving cancer treatment and clinical outcomes for patients. In addition, she is working to identify and target the key molecular players in the pathways that promote brain tumor formation. Loren plans to earn a PhD in cancer biology and become a research professor. In her spare time, Loren likes to travel, read and play with her pets.

Sophie Wu
Sophie Wu is an undergraduate research assistant in the Reitman Lab at Duke University from Seattle, WA. She is pre-health student working towards a bachelor’s degree in biomedical engineering and is set to graduate in May 2024. In the Reitman Lab, Sophie is developing and testing the RCAS-TVA-CRISPR-Cas9 system for future precision tumor modeling. After graduation, she hopes to attend medical school, potentially as an aspiring physician scientist. During her free time, Sophie enjoys playing tennis, drawing and spending time with friends and family. 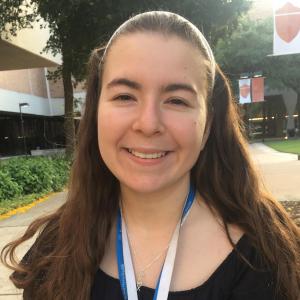 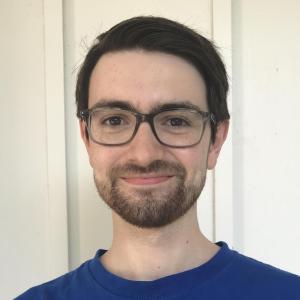 Maria Guerra Garcia, BS
Maria Guerra Garcia studied biomedical engineering and biology at the University of Texas at San Antonio and completed an honors thesis on the development of an animal model of Leptomeningeal Carcinomatosis to examine the efficacy of Rhenium-186 Nanoliposomes and other therapeutics. She was born and raised in Monterrey, Mexico, and is especially passionate about the fight against pediatric cancer and mental health advocacy. During her free time, she enjoys practicing piano, playing with her cat Daisy-Lu and volunteering as a crisis counselor for the Crisis Text Line. In the Reitman Lab, Maria investigated different brainstem glioma genotypes that are radiosensitized by the deletion of the ATM gene with the hope of increasing the therapeutic window of radiation and improving survival rates for adults and children with brainstem tumors. She aspires to become a physician scientist focused on caring for cancer patients, conducting research to improve treatments and outcomes, and advocating for her patients through non-profit organizational work. Maria is now a PhD student in biomedical engineering at Washington University in St. Louis.

Connor Stewart, BS
Connor Stewart was a research technician in the Reitman Lab at Duke. He obtained his bachelor’s degree in biological sciences from North Carolina State University in 2020, with a focus on cell and molecular biology. As a biologist, Connor is interested in studying the molecular mechanisms that underlie cancer and cancer treatment. He worked with Dr. Reitman to investigate the genetics of brain tumors, with the goal of improving treatment options and clinical outcomes. Connor hopes to eventually earn a PhD in cancer biology and to conduct research that helps improve our understanding of cancer. In his spare time, Connor enjoys watching baseball and playing the violin and guitar. Connor is now a PhD student in cancer biology at Emory University.